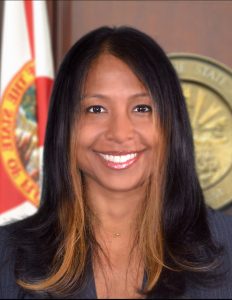 eleste Philip, MD, MPH, was appointed by Governor Rick Scott as Surgeon General and Secretary of the Florida Department of Health on May 18, 2016. Most recently, she served as the interim Surgeon General and prior to that as the Deputy Secretary for Health and Deputy State Health Officer for Children’s Medical Services. Dr. Philip, who is board certified in Family Medicine as well as Preventive Medicine and Public Health, brings a wealth of academic excellence and professional experience.

Dr. Philip has served as interim director for three county health departments, and as interim bureau chief for the Department’s Bureau of Communicable Diseases. She began her career with the department in Polk County where she served as medical director and served on the board of the Lakeland Volunteers in Medicine, through which she provided primary care to uninsured patients.

Dr. Philip was recently named the 2016 Outstanding Public Health Woman of the Year by the University of South Florida’s College of Public Health. She is a board member of the Florida Healthy Kids Corporation.

Dr. Philip’s contributions to public health are not limited to Florida. She is president of the American Heart Association’s six-state Greater Southeast Affiliate, and previously served at the Centers for Disease Control and Prevention (CDC) as an Epidemic Intelligence Service officer and preventive medicine resident.