As two shooters made final preparations to orchestrate a massacre in San Bernadino, a group of physicians were on Capitol Hill with petition in hand to demand an end to the Congressional ban on federally-funded gun violence research: the so-called “Dickey Amendment.” According to the Huffington Post, one day prior to 2015’s 353rd United States mass shooting, former United States Representative Jay Dickey presented a letter to Congress expressing his regrets for his introduction of the 1996 “Dickey Amendment” that restricted the Centers for Disease Control and Prevention (CDC) injury prevention and control funding from being used “to advocate or promote gun control.” Although this does not prohibit research on any aspect of gun violence, it certainly has placed serious limitations on it. 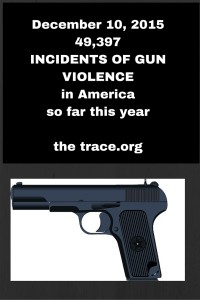 Despite President Obama’s 2013 executive order for resumed CDC research on gun violence causes and prevention strategies, there hasn’t been much movement. Yet, this may be about to change. A small-scale CDC study based in Wilmington, Delaware could be an initial attempt after 20 years to resume the study of gun incidents in the United States. “Whenever you have large numbers of people who are dying for preventable reasons, that constitutes a public health issue,” stated Surgeon General, Dr. Vivek Murthy. Dr. Murthy has been quite vocal regarding the public health implications of gun violence in America.

This week’s Huffington Post article, Why the Ban on Gun Violence Research is a Public Health Issue discusses the “ripple effect” of the 20-year “ban” on gun violence research. As Congress appropriates the 2016 budget, doctors and public health professionals are urging constituents to demand that restrictions be lifted and funding be made available for quality research that can be used to inform policy.

According to The Trace, an independent, nonprofit news organization dedicated to expanding coverage of guns in the United States, as of December 10, 2015, there have been 49,397 instances of gun violence (including nonfatal incidents and accidents) this year. This magnanimous number includes 353 mass shootings and 33,000 gun-related deaths.